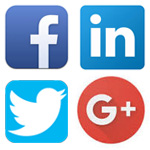 In a recent blog, we talked about how it can be counterproductive to market your business on every single social media platform. It is much more effective to choose only the platforms that will give you the biggest bang for your buck and focus your efforts here.

Of course, this then leads to a second question – what social media platform is going to be most effective for my business? There is so many to choose from, and new options are being created every year. (Just check out this list on Wikipedia!) This is why we thought we would do a quick post on the 4 most commonly used social media platforms and the pros and cons of using them for business.

Also keep an eye out for a future blog where we’ll go over five other (less common) social media platforms that can be useful for your business.

Most of you will be familiar with Facebook and how it was created by (the now famous) Mark Zuckerberg from his dorm room at Harvard. Most of you may also already be using Facebook to market your business.

Traditionally, Facebook was designed to help you connect with family and friends, as well as share photos, videos and other updates about your life. As it developed over time, businesses began to recognise its potential to reach and connect with customers and clients. Facebook takes advantage of this with its Facebook Business Pages as well as the introduction of paid advertising and the many tools that can be used to track your results.

The biggest benefit that Facebook has is its sheer number of users. As of August 2016, 1.71 billion people were actively using Facebook per month. 66.1% of these users also logged into Facebook on a daily basis. This means a greater potential reach for your business. To date, no other social media network has even been able to get close to competing with Facebook when it comes to the number of users.

Another great benefit of Facebook is how easy it becomes for potential customers and clients to find your contact details. All the information you include about where to find you and how to find you are searchable when a user is hunting for a business in Google. This may not matter if you’ve taken the basic steps to improve the search friendliness of you website. However, for businesses that may not yet have a website, it is invaluable.

One downside is that Facebook no longer makes it so simple to reach a new audience organically (in other words, for free). Back in the ‘glory days,’ all a business needed to do was create an account and start posting. With this alone, they had the potential to reach hundreds, if not thousands of new customers for very little money.

Then Facebook got a little savvier and changed its algorithms to make it harder. To reach the same number of people, businesses now have to pay to boost or promote a post. Think of it this way – Facebook wants you to pay for advertising as much as possible. This is their sole source of income. They aren’t going to make it too easy for businesses looking for free marketing.

Twitter is Facebook’s main competition in the social media world. The two have many similarities. Users are able to update their followers (called “tweets” rather than posts). Their audience can then share (“re-tweet”), like or reply to the original tweet.

While there is no social media network that can rival the user base of Facebook, the number of people currently using Twitter is nothing to sneeze at. As of September 2016, Twitter was boasting 313 million monthly users.

Twitter also has a different demographic than Facebook. Users tend to be younger, with the majority under 40 years old. If your target market falls into this category, you may find it a useful way of reaching new customers.

Like Facebook, there are also many third-party tools that allow you to automate your tweets while you’re away as well as tracking the success of your social media efforts.

One of the biggest gripes businesses (and individuals) have with twitter is the 140 character limit. This does force you to keep your communications direct and to the point (not always a bad thing). But it can be very difficult to word exactly what you need to convey to your audience with such a tight limit.

Given the sheer number of tweets posted each day, you’re competing with a lot of other content. An individual tweet that posted to promote a business can disappear from their audience’s feed much faster. It’s easy for your marketing messages to get lost in the clutter.

Google+ is similar to Facebook in that you can share messages or links with those that follow your business page. When it was first launched in 2011, it was expected to be the next big thing on the social media scene. However, it struggled to gain momentum and still hasn’t caught up to the other big players such as Facebook and Twitter.

Although Google+ has not achieved what it first hoped, there is still one LARGE benefit to using the platform.

Google+ is important because it is owned and operated by Google… and Google loves it when you use it. Unlike Facebook and Twitter, the platform was built for SEO (Search Engine Optimisation).  Please note that Google is notorious for changing its algorithms every five minutes, which means anything I say here is liable to change in the future. However, all evidence points to Google+ being (and staying) an invaluable step in increasing your businesses ability to score well on the search engine results page.

Google+ does not have the market share that Facebook currently does. The numbers and statistics currently relating to users can also be deceiving, given that any person with a Google account (this includes Gmail, YouTube or Google Calendar accounts) are automatically signed up for a Google+ page. To date, Google+ has also not been able generate the same level of engagement with an audience that Facebook or Twitter has produced.

With all this said, it’s still worth me mentioning that a lot of the content you create for Facebook can also be added to Google+ in the same way. If it doesn’t take you any longer to generate content, it may still be worth having an active Google+ account for your business, just to take advantage of the SEO benefits it can provide.

LinkedIn is a social media platform that was purchased by Microsoft in June of 2016. It differs from other platforms in that it was designed specifically for the business world. Facebook or Twitter might make it easier to connect with friends and family. On the other side of the spectrum, LinkedIn aims to help professionals connect and network with other professionals.

LinkedIn allows a user to make a profile that highlights their career, study and successes. Think of it more like an online resume. That user can then establish “connections” with other people that they know in a professional sense.

Many people join platforms like Facebook or Twitter in order to socialise and connect with other people on a personal level. This can occasionally lead to frustration when they jump on their account only to be hit with ads and or marketing campaigns. However, most users join LinkedIn in order to network or do business. As such, the community can be more forgiving to individuals who reach out to promote their business or services.

LinkedIn does not have the reach that other platform has. It also does not have the wide range of demographics that you see on other networks. LinkedIn users tend to work predominantly in the professional industry and depending on your business, you might find that very little of your target audience actually use the platform.

Hard selling and strong marketing campaigns is also frowned upon. People are here to connect with other professionals and not have products or services pushed into their face.

So that’s the “Big Four” when it comes to social media marketing. We’d love to know which social media sites you use as well as any pros or cons I haven’t thought of.

Also keep an eye out for a future blog where we’ll go over five other social media platforms that can be an effective tool in marketing your business.

The internet is a powerful platform providing a broad awareness... END_OF_DOCUMENT_TOKEN_TO_BE_REPLACED