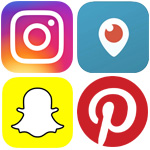 In our last blog we spoke about four social media platforms that are commonly used by businesses in their marketing strategy. Well, today we have five more for you.

However, unlike platforms we discussed before (Facebook, Twitter, LinkedIn and Google+), these five are much newer to the marketing scene. While you may have heard of some of them, have you thought about marketing your business on them?

Snapchat is based entirely within an app. As such, it can be used on a phone or tablet, but not a computer. It allows its users to take a photo or video (or “snaps”) and add captions, filters, drawings or emojis before sending it to their friends.

Originally these videos and photos could only be viewed by friends or followers before it was gone forever. (This, of course, led to many inappropriate snaps being sent by not-so-smart people who didn’t realise the power of the screenshot function on an iPhone… but that’s another topic entirely).  These days, you can allow your friends to replay a Snap or add it to your story (allowing it to be viewed for the following 24 hours).

Before we go any further, I want to clarify the difference between sending a photo directly to your followers or adding it to “your story”.

When a snap is sent direct, you can choose exactly which people will receive it. Those people will then receive a notification to say that a new snapchat has been received. However, when you add a photo to “My Story” it can be seen by anyone over a 24 hour period. They won’t receive a notification. Instead, they can just jump onto snapchat when it suits them to see what’s been posted recently (not unlike cruising through your Facebook feed to see what’s been posted recently).

When it comes to marketing your business, sending promotional snaps direct to particular followers is frowned upon. It’s unsolicited and has much more of a “junk mail” feel to it. Instead, I’d recommend adding updates and promotional content to your story so people can choose to view it when they feel like it and ignore it other times. It’s less intrusive and will encourage more “feel good” vibes towards your brand.

The major benefit of using snapchat in this way is that it allows you to connect with your audience in a more informal and personal way. You’re limited to the quality of the camera on your phone and tablet, which can make the content appear raw and less curated. Sending updates on what your business is up to can humanise your brand, as well as allowing you to show your audience what’s going on behind the scenes.

Snaps are made within the Snapchat app at the time of posting the content. As such, it can be more labour intensive to create and carry out a detailed marketing strategy. You can’t schedule a snap in the same way that you can a tweet or Facebook post.

People can be more resistant to following businesses on Snapchat as they’re worried that they will be hit with a wave of direct snapchats. However, the platform is still a relatively new medium for marketing your business. Perception of the app and standard procedures when it comes to marketing your business might change over time.

Most of you would have heard of YouTube. However, not all of you may have thought of it as a marketing tool.

YouTube is a video sharing platform. More and more businesses turn to the website each year as a way to promote their business. The opportunities here are endless. It’s perfect for everything from tutorials on how best to use products to videos showing their audience what’s going on behind the scenes.

Because the platform is so visual, it’s a great way to humanise your brand and put a face – or faces – to your business name.

There are other SEO (search engine optimisation) benefits that come with posting videos. YouTube is now owned and operated by Google. As such, the platform has been integrated with its search engine. You may have noticed this the last time you went to do a search in Google. Quite often, the first few links that appear are links to videos within YouTube. This also increases the chances of your brand being found by someone searching Google for information relating to your business.

The final benefit I’ll mention here is its ability to be easily embedded into your website with a few simple clicks. Without this method, a video file would need to be added to the server of your website and then be inserted into the relevant page. This decreases the speed in which your website page loads. It may also make it hard for a viewer to watch if they don’t have compatible software already installed on their computer.

Of course, there are also some cons when it comes to using YouTube for business. Many people (myself included) are much more intimidated by the thought of being behind a camera than the thought of writing a blog post or posting a photo to Facebook.

Creating visually appealing and informative videos can also be very time-consuming. For best results, the video needs to be planned, recorded and edited. Not having the right equipment can also result in a video that does not appear as professional or as effective at engaging your audience.

Periscope is a relatively new platform that is owned by Twitter. It allows its users to “lives stream” a video to their followers from an app on their smart phone or tablet. Think of it more like “Skype” rather than YouTube. Your viewers can see you as you talk. They can also type comments and ask question. These comments show up on your screen while you’re recording, which allows you a chance to answer questions and interact with your audience in real time.

Periscope will also notify your followers when you’re about to do a live transmission, so they can jump online at the right time. There is also the option to re-watch a video for up to 24 hours after the recording. After that, it disappears. (Although, I have seen some businesses record their live video at the same time, which can then be embedded into their website).

Quite often, businesses will use Periscope to highlight their products or services, give a tutorial or provide something more structured like a webinar. It’s also an opportunity to humanise their brand by giving their audience a ‘behind the scenes’ look at their business.

Just like with YouTube, video is a great way to humanise your brand. It helps put a face to your name and show that you are just like they are – an ordinary person.

The live comments and questions that your viewers ask as you stream the video also gives you a chance to connect with your audience in real time. Contrast this to YouTube, where viewers are required to comment on the content after it’s been posted.

If you have a Twitter account, you can link it to your Periscope. Any time you post a video to Periscope, it will also show on your Twitter page. This means that, if you already have a social presence on Twitter, there is no need to build a new audience on a new network. Your existing followers will already be notified.

If you thought getting behind a camera for a YouTube video was intimidating, imagine if that video was also live. There’s no chance to pause, go back or edit out that little blooper you just made.

Think of Pinterest like a web-based pin up board. Whenever a photo within an article or website catches your eye, you can choose to “pin it” to your pin up board and refer to it later. As you scroll through this pin up board, a photo from the article is displayed. As a viewer, you have the option to then click through to that website to read the content associated with that picture.

The focus in Pinterest is the image that is pinned to the board and not the text that goes with it. This makes it a very visually appealing way to share content.

Another benefit is the ability to create various boards with different categories. That way, people can choose what they do want to follow and what they don’t. For example, a fashion brand may have one board for “woman’s shoes” and another for their “men’s shirts”. Those interested in women’s shoes can choose to follow that board and not be bombarded with images of the products that aren’t relevant to them.

The article or website page that you want to share must have an image in order to pin it to a Pinterest board. Little information is displayed with the image. If it does link to a page with further content, then the image needs to be engaging enough to encourage people to click through… talk about needing an image to be worth 1000 words.

Instagram is another social media platform that focuses mainly on images and visual aesthetics. It allows its users to share images with users that have “followed” their page.

A few years ago, Instagram was bought by Facebook. When it was first acquired, Facebook made very little changes to the platform… until now. Recently, advertising and sponsored posts have also been added, allowing businesses to pay to get their content in front of their target market.

One positive change that has now been made is allowing users to create ‘businesses accounts’. Similar to Facebook, a business can have a separate Instagram account to their personal profile. Previously, an account for a business was created in the exact same way as you would for an individual.  (This also meant that you had to be logged in either to your business or personal account. You couldn’t jump between the two in the same way you can on Facebook).

The emphasis on visual images makes Instagram a very aesthetically beautiful way to present your services or products. Unlike Facebook (which has always been cluttered, both on desktop and on mobile), Instagram’s layout is clean and neat. There are also a collection of awesome filters and editing tools that can help you turn an ordinary photo into something beautiful.

While Instagram doesn’t have the reach that Facebook does, it is very popular for the younger generations. The number of millennials using the platform is growing exponentially each year. So if this is your target audience, it can be a great way to reach potential customers or clients.

The focus on the visual can also be a handicap for some businesses. Each post must be accompanied by a photo and it is that photo that is emphasised in the app. The caption below is a secondary piece of content and can often be overlooked.

The algorithms behind Instagram have also changed recently, making it harder to get your content in front of a large audience. Previously, photos appeared chronologically on the users feed (with the most recently posted images being displayed at the top). Since Facebook has taken over Instagram, they’ve changed this chronological order. Instead, the content ranked the highest is content deemed by the algorithms to be something that the viewer would be interested in. The more likes or comments an image gets, the better it does.

So what are your thoughts on these five social media platforms? Do you already use any of them to market your business? If so, let us know.

The internet is a powerful platform providing a broad awareness... END_OF_DOCUMENT_TOKEN_TO_BE_REPLACED