While social media is a perfect way to engage with customers, it’s not a one-stop shop. Some customers will want to know more details about you and your products/services before they feel comfortable buying from you.

This is where your website comes in. It’s a place that people can visit in order to learn more about what you have to offer. So once you’ve built a relationship with your customer on social media, the next step is to direct them to the relevant page on your website where they can learn more or contact you. 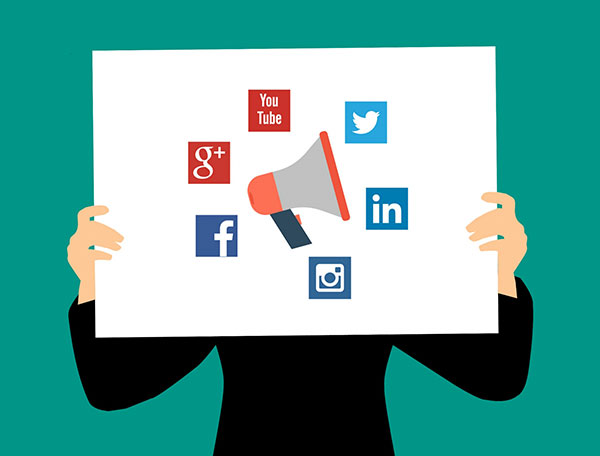 While social media is a free platform, sometimes it will only take you so far. Paid advertisements through Facebook, Instagram or Twitter are often designed specifically with website traffic in mind. For example, if you set “traffic” as the objective of your Facebook or Instagram campaign, the platform will then optimise the ad for that purpose. As an added benefit, you set up the ad so you only pay when someone clicks on the advertisement (as opposed to paying for each time the ad is shown to someone).

You’ve probably heard the phrase “a picture speaks a thousand words”. This is especially true when it comes to social media. Research has found that a Facebook post with an image generates 2.3x more engagement than a post with text alone. Similarly, LinkedIn posts with an image can receive 200% more engagement and a tweet with an image is 150% more likely to get retweeted then their text-only counterparts.

When you’re busy and sharing information that doesn’t naturally lend itself to an image, it’s tempting to throw up a post that is text only. However, think of the way that we usually use social media. Generally, we skim read, stopping to delve deeper only when something catches our eye. The text is often not enough in itself. Often, it’s the image that first catches our attention.

In order to increase engagement and encourage more people to click through to your website, you first need to interrupt their mindless scrolling. Using an engaging image with your message is a great way to do this.

Include your URL in your Bio

This is a simple tip, but it's surprising how often it’s overlooked. Every social media platform has an “about” section where you can add information about your business and what you have to offer (called a “bio” by these tech giants). Make sure that your website URL is included in this section.

The goal here is to make it as easy as possible for people to find you. If someone finds your business on social media and thinks “I would like to know more”, it is much quicker for them to click through to your website from your bio, then searching for you in Google. The fewer steps required, the better.

Let’s say that you have a sale catalogue on your website that you want people to see. Don’t just share it once and leave it at that.

The life of a social media post is short. It will only be shown to a percentage of your followers, and after that, it becomes lost in their feed. To reach more people, share the catalogue a few times between now and the sale date. Experiment posting on different days and at different times to see what gives you the best reach.

You don't need to go overboard - re-posting the same link to your website every single day without fail will only alienate the people who have gotten the message more than once. However, letting people know about your event once or twice a fortnight is unlikely to annoy those who have already seen the post and will also serve as a reminder for those have forgotten to add it to their calendar.

As well as just getting in front of a potential customer, you also need to entice them to learn more. This is where your choice in words becomes important.

The perfect caption will vary depending on the type of business and their target audience. Young students are always going to have different interests than a 40-year-old professional.

When deciding what to write, always ask the question "is this going to interest my audience”. You could also follow in the footsteps of many great marketers and create a “client avatar” – a fictitious character that represents your ideal customer – and write with them in mind.

2. Write in your customer's language

It's human nature to respond well when you feel you can relate to the person you're speaking with. Using the same language and mannerisms as your target audience helps build trust in your brand.

A fantastic example of this is the product descriptions on ASOS, a British online fashion and beauty retailer. Their ideal customer is a young twenty-something, fashion-loving women. While crawling through their app recently looking for the perfect black coat to add to my wardrobe, I noticed the following care instructions: 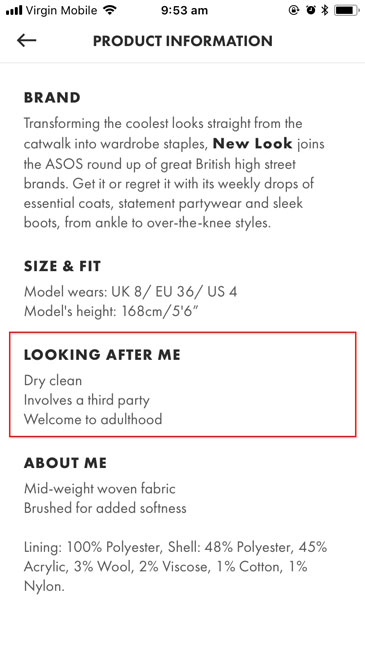 For those of you who haven’t heard, becoming an adult is the new bane of a twenty-something-year-olds existence. By this, they’re not referring to turning 18. Adulthood in this context refers to that time in our life where we find ourselves doing activities that we used to attribute only to “fully mature” adults[1]. The term “adulting[2]” has even been coined to describe these more mundane tasks. ("Spending my Sunday catching up on washing and cleaning the house? Prioritising saving for a house deposit instead of splurging on that beautiful coat I saw on ASOS? Adulting is hard!")

ASOS have taken full advantage of this by writing their care instructions in the informal language that comes naturally to their target audience - millennials. You can also see a few other great examples below. 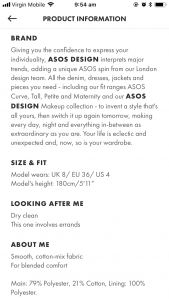 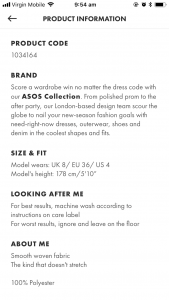 Instead of writing "visit our website for our full list of products", word it in terms of what benefits the person will receive by visiting your website. As an example, "visit our website to learn more about how Product X will provide you with Benefit Y". The latter is going to be much more enticing to a potential customer.

A useful exercise is to pay attention to what catches your eye the next time you're on social media. I know... homework... not what you want to be doing when scrolling through Facebook at the end of the long day. However, noticing every time that you click through to a website from social media can provide valuable insight into what it was that persuaded you to do so. How was the post written? Was it a photo that first caught your eye? Where you in the market for this exact type of product/service? Did they portray a benefit that you would receive? Take a mental note of these factors for the next time that you're posting to your own social media account.

The internet is a powerful platform providing a broad awareness... END_OF_DOCUMENT_TOKEN_TO_BE_REPLACED